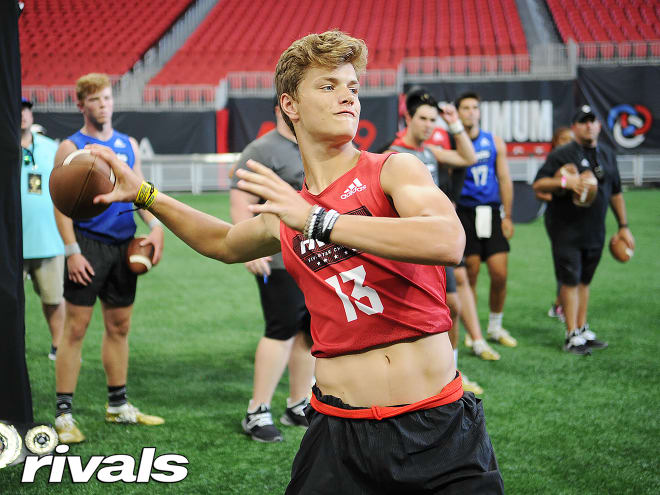 The news of the Big Ten canceling the fall football season spread like wildfire in the recruiting world. With so many top recruits already verbally committed to play for Big Ten teams, their reactions to the news was a mix of shock and sadness. Take a look at what some prospects that are committed to Big Ten programs think of the decision to cancel the fall football season.

GORNEY: How Big Ten decision will affect the recruiting world

“I mean it’s 2020, so it wasn’t something that blew my mind, haha. This is out of everyone’s control and we, as well as Michigan, are taking it one day at a time. I feel for the senior college football players, but we all know tough times never last but tough people do. This will unite college football and in the future years, college football will be even more appreciated.”

“I’m shocked because, the way Michigan was handling the virus, I assumed every other school was too. I thought everything was all right but I’m also worried this means my season might not happen too.”

“Very Crazy. Some players are only gonna be playing 2 years.”

“That was tough to see, especially because I felt like the players and coaches advocating to play had some great arguments in their favor. It’ll be tough for me and the rest of the Michigan recruiting class too, because a lot of us haven’t experienced a Michigan game in person, which was something we were all looking forward to doing together. And most of my family hasn’t been able to make it out for a visit.”

“It’s really unfortunate. It’s probably going to be up to each of the conferences. I’m hoping it doesn’t affect anything with me getting there early.”

“I think it’s sad. There are guys depending on the season to get drafted.”

“Wow! My reaction is that some type of player panel or NCAA PA like the NFL has needs to be formed so we can have our needs met.”

“Very crazy, but I’m not surprised. COVID was going to win anyways so I think it’s better that they do it now opposed to half way during the season. I wish the season could go on, but the safety should be the priority. Ultimately, I think it’s a lose-lose situation for the NCAA and the teams/players.”

“They should keep it in the fall. Moving it to spring won’t do anything. Covid is still going to be around. All the coaches and players want to play but yet they have no say in the final word which is kind of stupid. I get that they’re worried about players’ safety but those players are playing a very physical sport and are at risk of injury every time they step on the field. It doesn’t affect my recruiting though, still gonna be a Hawkeye.”

“(Jantzen) just feels bad for the players at Ohio State. Especially the seniors. He feels like this was going to be a championship season for them. It sucks for everyone but necessary. You have kids and coaches that have put in a ton of work and that will go unnoticed. I hope that we can get back to some kind of normalcy soon.” – Dunn’s father, Mitchell Dunn, via Dave Lackford, BuckeyeGrove.com

“That’s crazy to hear. All these players are putting the work in and don’t get to play. It’s sad.”

“They have worked too hard for their season to be canceled like that. It’s discouraging to see so many players see their season cancelled and some careers ended because they can’t take that chance with the draft.” via Dave Lackford, BuckeyeGrove.com

“I’m definitely upset about the news of the season possibly being cancelled. I thought what all the college athletes did on Twitter in support of the hopes of having a season was awesome. It was really cool to see so many different players from different teams come together like that.” via Ryan Snyder, BlueWhiteIllustrated.com

“I can’t imagine the Big 12 and other conferences aren’t far behind them, and even if they do stick it out, I’m forever a Hawkeye regardless.”

“Nothing changes. I made a commitment, and I will honor that. Just have to adjust moving forward to the circumstances.”

“It doesn’t (affect his recruitment). I mean I was a guy that was going to go in December so I have no clue if I still can or if it has to be changed.”

“It wouldn’t change anything really. But it is really unfortunate because not only was I not able to do my official, but I can’t go to games in the fall.”

“It doesn’t really affect my recruiting, but it does affect me enrolling early depending on what the Big Ten does. If they move the season to the spring I most likely won’t go. I don’t want to lose a year of eligibility when there are two receivers Ihmir Smith-Marsette and Brandon Smith who are graduating and might be potential draft picks.”

“It doesn’t affect my recruitment at all. But as for my thoughts, the season should be played in the fall.”

“It sucks but I’m all Michigan. Nothing is changing.”

“The Nebraska administration and coaches have handled this in my opinion the best in the country. They’ve put the athletes’ best interest in mind while still keeping them safe.”

“I’m really surprised they cancelled so early. I am going to miss watching them play, but other than that, it doesn’t bother me.”

“It’s crazy that they are choosing to remove the student-athletes from an extremely safe environment as far as protecting from the virus and to add on the players want to play and if there was a choice to opt-out on the season there should be one to opt-in as well. As far as my recruiting goes, I am 110 percent committed to the University of Nebraska and to the coaching staff there. I feel they’ve done a great job advocating for the players to let them play and the fact that they are one of the programs out of 12 to say ‘yes let our athletes play’ definitely stands out to me.”

“Not really messing my recruitment up because I’m already committed so on my end no it doesn’t affect me.”

“I would hope they can figure something out and play this fall but if not it wouldn’t affect me I would still be able to graduate early and get there.”

“I don’t have a whole lot to say other than let us play. We put our lives at risk when we step on the field every day. How are we going to let a sickness that you have to be tested for to know if you have it, stop us from our season and put us out of hundreds of millions of dollars. Nebraska wants to play and they all know the risks. Let us play. It does not affect my recruitment on my side of things. I am 100 percent committed to Nebraska. I am unaware what may happen to the program or to college football in general if we don’t have a season.”

“It doesn’t affect my recruitment at all. I believe Nebraska is doing all they can to play. If they decide to move it to the spring then that is the best scenario for the players and staff. I know health is No. 1 to Nebraska and I hope they are able to play. I can’t wait to be in Lincoln watching them in Memorial Stadium.”

“It definitely does affect me in a major way, mostly because I’m a mid-year guy so I don’t know what that would mean for me enrolling early.”

“It will be upsetting if they do have to cancel or move the season but I understand that teams have to do what they have to do for the safety of the players, staff, and the people around them. I really hope they can find a safe way to play this fall and whatever the outcome is it will not affect my recruitment at all. I’m still a Buckeye.”

“I’m still waiting to hear what’s going on there and in terms of my recruitment, I’m locked in and will sign with Ohio State in December.”

“It won’t affect my recruitment at all. I’m just upset that it’s a possible solution.”

“It makes me kind of unsure on how things will go for the 2021 class. I know a lot of players want to play and I think that if I was in that situation, I would want to play as long as there were things in place to help keep us safe. As far as I know, based on my conversation with Penn State, it has not affected my recruitment but everything is so crazy right now, who knows.”

“It’s unfortunate they can’t play in the fall but it’s great that they still have a chance to play. Of what I know, the switch doesn’t affect recruitment very much.”

“I feel like it might have a big influence on my recruiting because It might not allow me to leave for school early and if we don’t have a season at all will that grant seniors another year and take away some of our scholarships?”

“It doesn’t affect my recruitment In any way I’m confident in the decision that I made. As far as the season possibly being moved to spring it’s going to be tough but I’m all for it as long as the guys get to play a season.”

“I think that right now it’s not really my place to be an advocate or try to push for a change one way or another, but there’s definitely going to be teams and players who will be impacted in many different ways whether they are good or bad.” via Richie Schnyderite, TheKnightReport.net

“Honestly I think canceling isn’t the worst idea. Corona is a very serious matter, and even though I would love to watch my team play, I completely understand the reason for the Big Ten choosing to cancel.” via Richie Schnyderite, TheKnightReport.net