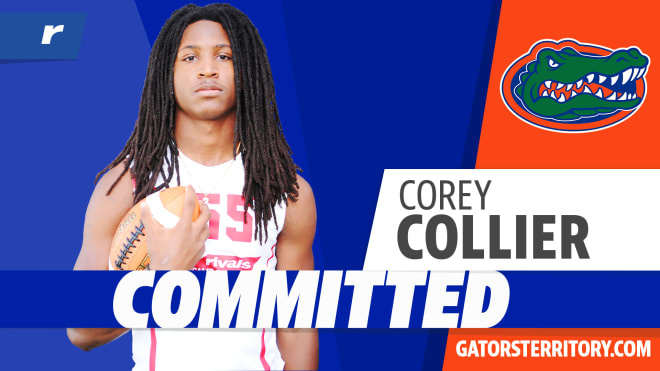 Five-star defensive back Corey Collier committed to Florida on Monday afternoon, giving the Gators their second massive recruiting victory in the last few days. Below, Rivals.com has a look at what UF is getting and also what Collier’s commitment means for the big picture.

WHAT FLORIDA IS GETTING: Collier is long, physical and is capable of playing multiple positions in the secondary in a pinch even though he’s best suited to stay at safety. The Miami Palmetto High School star knows how to use his incredibly long arms to make up for a lack of truly elite top-end speed and should become better in run support as he adds size at the next level. He may not be as developed or polished as other safeties in this class but his ceiling remains as high as anyone’s. Collier is the kind or prospect that could emerge as a national-level star later in his career, as he has the frame and athleticism to be a pro prospect. How quickly he’s ready to make an impact on the SEC will hinge on his physical development and the coaching he gets in Gainesville. His NFL upside, however, is undeniable.

WHAT IT MEANS FOR THE GATORS: Florida came into last weekend needing a recruiting victory, as in-state rival Miami has become red hot on the trail in recent weeks and seemed to be out-recruiting UF despite a major disparity in on-field results. The Gators didn’t just get one win, however, they stole two. Collier’s Rivals100 high school teammate Jason Marshall committed to UF a few days before Collier made the call. With Florida State a non-factor in the state for the most part, the Canes-Gators recruiting rivalry is one of the more intriguing storylines of the offseason and could continue to pack major intrigue next cycle regardless of whether or not a 2020 season is played.