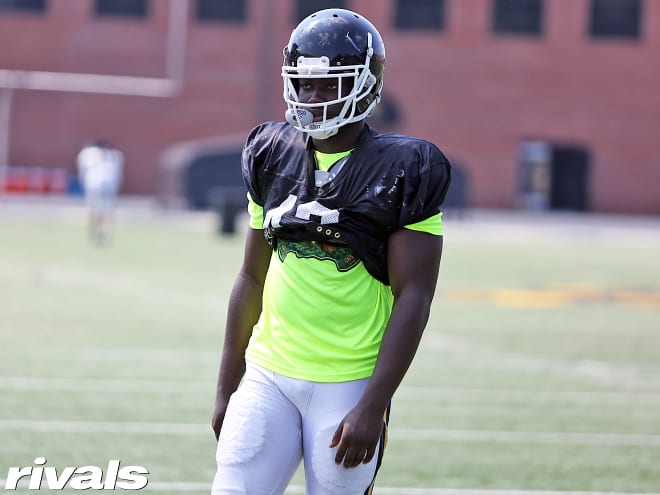 CARROLLTON, Ga. — In just over two months, all should know where 2021 pass rusher Khristian Zachary will be playing college football. For him, it is more than just football when it comes to his decision, but we will let him tell you what is more important to him a little deeper into this update.

A date has been circled on his calendar and it comes in the middle of October.

“I am set on committing October 15,” said Zachary. “I have been praying on this, waiting for God to give me an answer, and He has given me the vision to commit October 15.

“I expect to know my decision before then, but October 15 is when I will announce my commitment. I am not sure when exactly it will hit me, but I know I will be ready on that day. Even if I knew next week, I would not announce it until October 15. That is the day for me that God has shown me.”

Two and a half months ago, in the second half of May, Zachary came out with a top six of Alabama, Colorado, Georgia, Missouri, Oklahoma and Tennessee. Most of those schools are still being considered, but there is a new school in the mix.

“Things have changed a little bit for me. Florida State has jumped up there for me. I am attracted to that program because they are re-building something. They have a great opportunity for me and being able to help re-build something is very attractive to me.

“Florida State has been messaging me a lot, hitting me up on Twitter a lot and over the last couple months, they have made a move up my list. They have kind of put their name on my list of schools.”

Mike Norvell’s program is new to the list, but the others on it have been in the mix for some time. At the beginning, it was about selling their programs, showing off the NFL players, showing Zachary how he can make an impact, but over time, that has shifted to much more personal calls.

“On most calls now, it is about my visions, the church I want to build, name and likeness and things around that. It is not much about recruiting anymore.

“I had a great call with coach Nick Saban last week about Alabama’s structure, the culture there and the accountability. It is stuff like that, that means the most to me.

The brand means so much to Zachary. He is about the 7-Nation, and that is something the schools in pursuit must be aware of.

“The name and likeness, helping the image and things like that have changed the game,” said Zachary. “How a school can help there will play a big role in this for me. It is now more like we are individual’s first, then a team, so our brand and image is very important to me. Now we have to be even more selfish with our decision due to this.

“Tennessee actually had a Power Point to show me about the brand, how they can help me build that and do what I want to do with my visions, so that was cool. Alabama has talked about that too.

“Schools are being looked at for much more than football now. We have to think about who can help us most as individual’s too. I have to find the right platform for me. What school can help my brand? That is now a big part of my decision.”

Outside of name and likeness, Zachary wants coaches to know him. No, not the 6-foot-3, 238 pound athlete that sacks quarterbacks. The person behind those pads.

“Who has done the best job of getting to know me is going to be most important. I am really looking to see who has gotten to know me, who knows my personality, who knows what I stand for and who really is recruiting me, not the football player.

That is so important as he moves forward towards a decision this fall.

“It is all about being led for me. I am taking my time, talking to the right people, putting weight on the right things to get me there, and I feel confident I will make the right decision.

“The church and vision is first for me, so that is going to play a big role in my decision. I know God will lead me to that.”

Zachary said there is no order of schools and that his list is set at seven. He does not plan to cut his list again and he feels “certain” that he will commit to one of the seven schools he’s listed.