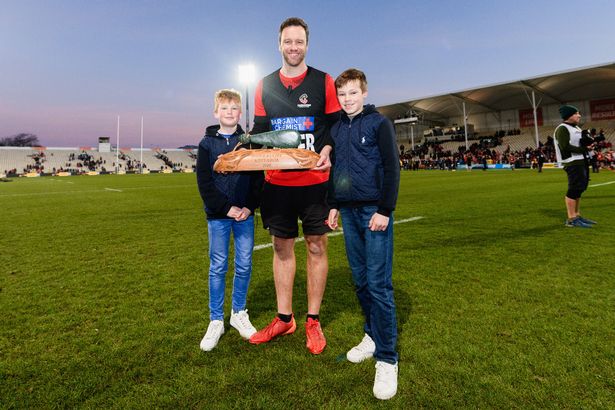 It was a big decision for Mark Jones to uproot his young family and take them on a 12,000 mile journey to live at the other end of the world.

But it’s one that has been wholly vindicated with him sharing in the Crusaders’ triumph in winning the Super Rugby Aotearoa tournament.

The Christchurch-based side sealed the title with a game to spare as they beat the Highlanders 32-22 in a thrilling clash at the Orangetheory Stadium on the weekend.

It was a special moment for Jones, which he shared with his wife Helen and their two sons Caleb and Isaac, as they were pictured with the trophy after the game.

They’ve been out in New Zealand since January, with the former Scarlets, RGC and Wales coach having taken on defensive duties with the Crusaders in a big career move.

As if that wasn’t enough of a change, there have also been the challenges presented by the coronavirus pandemic.

“It’s been a bit of a rollercoaster really. We were just reflecting on it now,” said the 40-year-old, speaking from his home in the Merivale area of Christchurch.

“The rugby decision to come over here was never really in question.

“It was more a case of can we make it work with the family. Were we strong enough to be able to leave grandparents, cousins and close friends and up sticks and move in a short space of time?

“It wasn’t an easy decision. We had a good think about it over the December period.

“It wasn’t the rugby, it was the lifestyle change we were worried about because you are a long way away from your natural support.

“It’s been tough for all different types of reasons and still is a little bit.

“My wife has gone on a sabbatical from her work as a lecturer in Neath College, so she’s been trying to fill her time while I’m in work.

“And because of the lockdown, we didn’t have the chance to build those relationships, either in school with the kids or Helen with the parents of the other schoolchildren.

“We obviously haven’t got any close family here.

“The boys are 11 and 9. It’s been tough on them. But, fair play, I am proud of them, they have done a marvellous job getting out here and ripping into it.

“They are playing rugby for the Christchurch club up the road and they are loving that. They are not letting the Welsh down out here with their performances.”

Jones was joined by his sons on the pitch following the title-clinching victory over the Highlanders, with the family then getting to pose for a picture with the trophy.

“That moment really confirmed that coming out here has been the right decision, 100 per cent,” said Jones.

“It’s a beautiful trophy, a bit different to normal traditional ones.

“The only thing is you can’t drink out of it. That’s the problem!”

Aside from settling in a new country, for Jones there’s also been the challenge of taking on the somewhat unfamiliar role of defence coach and in a competition that features some of the best attacking players in the world.

“I thought it was a good opportunity,” said the former Wales wing.

“All my roles previously have been predominantly attack.

“I think it will make me a better rounded coach, focusing a bit more on the defence.

“Being a defence coach in this competition is not good for the heart rate, mind. It’s no fun at times!

“Because they have tweaked the interpretation of the laws, the game has got even quicker.

“The ball-in-play time is a touch lower than usual, but when it’s in play it’s faster.

“The way the teams are attacking at the moment, the ball is really quick, so it’s hard to get off the line and put pressure on the ball.

“You are constantly finding yourself on the retreat. It’s tough.

“With the law adjustments, the jackler has got a few more rights to the ball, so you are finding there’s a lot more turnovers.

“You are defending off a lot more unstructured play.

“Then you throw in all those power athletes that the Kiwis have got – the likes of Shannon Frizell, Patrick Tuipulotu, Rieko Ioane – and it’s bloody frightening.

“It will be good to have a bit of a break from trying to stop all these awesome attackers.”

The Crusaders – who have won six out of seven matches in the Aotearoa tournament – have one more game to play, against the Blues up in Auckland, next Sunday.

Then the 47-times capped Jones will change hats and take on attack coach responsibilities with the Canterbury provincial side.

Given there wasn’t a regional opportunity for him in Wales once he finished with RGC and completed his stint with Namibia at the World Cup, one wonders whether he feels he has sent out something of a message with his success in New Zealand.

“I didn’t look at it as having a point to prove at all really,” said the Builth Wells product.

“Every rugby job I have taken I have tried to use it to better myself as a coach.

“When I was looking at some of the roles around, I just felt this was the best one for me now.

“I don’t hold any grudges. You just get on with it and this has been a great fit for me so far.

“It’s been a brilliant rugby experience.”

“So you are conscious that the young fellas coming in have got big shoes to fill, but they have done a terrific job.

“It’s an immense achievement to still be able to come out on top. It’s actually made that achievement even a bit more special.

“It’s been a brutal old competition.

“Coming from Wales, where we’ve got quite a small talent pool, to see the strength in depth they have got here in a population of just five million is frightening really.

“There is a conveyor belt of them coming through in most positions.