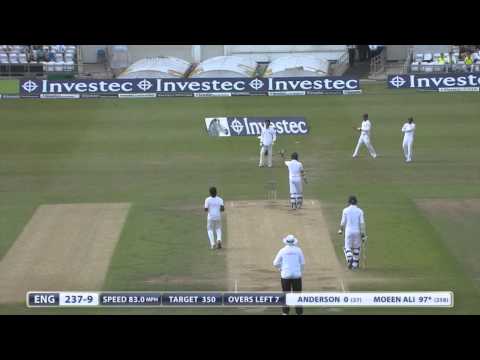 After a thrilling draw at Lord’s in the English summer of 2014, Sri Lanka faced England at Headingley for the second and final Test of the series.

Despite openers Dimuth Karunaratne (28 off 65) and Kaushal Silva (13 off 38) wasting their starts, Sri Lanka were in a relatively decent spot at 5-228 in the last session of Day 1. But the dismissal of Kumar Sangakkara (79 off 147) would see the Sri Lankans collapse to an under-par score of 257 all out.

English openers Alastair Cook and Sam Robson had a tough hour to negotiate, but the pair survived as England went to stumps at 0-36.

Sri Lanka started Day 2 positively as Alastair Cook was removed for 17. Yorkshire boy Gary Ballance joined Robson and the pair put on 142 for the second wicket en route to the duo reaching their half-centuries.

At 1-191 Ballance missed out on a golden opportunity to score a Test century at his home ground as he was caught behind for 74. Robson reached his maiden Test century as he and Ian Bell (64 off 90) took past Sri Lanka’s first innings total.

At 2-278 England had the perfect opportunity to bat Sri Lanka out of the game and possibly win by an innings. But this is England we’re talking about. They love collapsing from dominant positions.

Nuwan Pradeep nipped one back at Robson’s stumps as the Australian-born batsman departed for a well-made 127. From there England struggled to post a daunting first-innings total, bowled out for 365. Despite the collapse, England went into the second innings with a lead of 108.

Kaushal Silva’s love with number 13 in the Test continued, with the Sri Lankan opener dismissed first. Dimuth Karunaratne got a start but departed for 45. Kumar Sangakkara scored his fourth 50-plus score of the series as he and Mahela Jayawardene (79 off 168) took Sri Lanka into the lead. But the off spin of Moeen Ali denied Sangakkara the chance to score a hundred in his last international innings on English soil, trapping him LBW for 79.

After losing another quick wicket, Angelo Mathews and Jayawardene steadied the ship, and Sri Lanka were 4-214 at stumps on Day 3.

Mathews and Jayawardene kept on attacking as the lead passed 150, but the new ball alongside the duo of James Anderson and Liam Plunkett caused a mini-collapse as Sri Lanka faltered to 7-277. With a lead of only 163 and tail-enders who aren’t known for their batting abilities, the onus was on captain Mathews to steer Sri Lanka home.

Boy, does he do it in fine fashion.

With Rangana Herath (48 off 82) the pair put on 149 for the eighth wicket before Herath was run out. Mathews scored his best hundred under massive pressure before he was dismissed for 160. Sri Lanka ended up being bowled out for 457 as England were tasked to chase down 350 on a deteriorating wicket.

Before the English second innings Sri Lankan quick Dhamikha Prasad’s Test numbers were woeful: 23 wickets at 59.61 with an economy of 4.11. In the last hour of Day 4 Prasad bowled the most devastating spell of his life. Removing Alastair Cook (16 off 39) first, Prasad took four wickets in his first spell with England 5-57 at stumps on Day 4. Sri Lanka could sniff victory while England were praying for a miracle.

After battling for over 30 overs alongside Moeen Ali, Joe Root’s blockathon (31 off 108) came to an abrupt end when the hometown boy was caught at gully. Ali reaches his 50 soon after, but he and Matt Prior knew the job was far from done. Prasad’s persistence with the short ball paid dividends when Prior was dismissed less than half an hour before tea. Prasad had taken his maiden five-wicket haul.

With the Sri Lankan seamers doing nothing with the new ball, Angelo Mathews summoned Rangana Herath. For the first time in this series the Sri Lankan veteran is called on to make breakthroughs in a dire situation. Herath paid back his skipper’s faith, removing Chris Jordan (21 off 62) and Stuart Broad (0 off 31).

England needed to survive 20.2 overs to pull off a miraculous draw with enormous responsibility falling on the inexperienced Moeen Ali and veteran seamer James Anderson.

Ali reached his maiden Test tonne in what was his second Test, but individual scores weren’t anywhere near as important as the result. He and Anderson kept on fighting, slowly chipping away at the balls left to complete Day 5.

With two overs left in the day, Mathews brings on Dhamikha Prasad for one last over. Despite taking a five-wicket haul, Prasad fails to take the final wicket.

One over left. Mathews has the chance to go for the expensive, but faster Nuwan Pradeep or the economical Shaminda Eranga.

He gives the ball to the latter. Anderson survives the first four deliveries.

Two balls left. Pressure on Eranga to pull off a dismissal. He bowls a bouncer, giving it his all. Anderson fends again, except the ball pops up instead of going down.

The ball goes straight to the hands of Rangana Herath.

Sri Lanka won the Test by 100 runs and pulled off one of their finest Test victories with one ball remaining in the test.

Before this series began, Michael Vaughan called the Sri Lankan bowling attack “a glorified county attack”. His comments reeked of arrogance and were surprising to hear considering England was in rebuilding mode after the 2013-14 Ashes drubbing.

For a glorified county attack, Sri Lanka’s bowlers picked up 37 out a possible 40 wickets on two roads. Their bowlers began an English collapse at Headingley twice. And, boy, did Angelo Mathews have a dig at Vaughan during the post-match press conference.

Throughout the series Sri Lanka was the underdog who faced the brunt of the English – whether it was the players, the English crowd that is the Barmy Army or the cricket pundits. But during the one innings, when the Lankans were in control, they lapped it up and lapped it up hard. He who laughs last laughs longest.

Six years on, only Australia in 2019 has been able to breach the British Isles, with all others drawing series at best. With England taking a 1-0 lead against Pakistan in Manchester recently, it looks like we may have to wait a bit longer to see England lose a home series again.

I think this shows how the cricketing public should appreciate Sri Lanka’s efforts in 2014 even more. After all, a glorified county attack achieved this, eh Michael?