Any doubt about who should be playing at number 7 for the Wallabies this season has been erased by the Waratahs’ comprehensive 45-12 rout of the Reds in the gathering rain on Saturday evening.

When I wrote this article only three weeks ago, things were looking pretty rosy for the men from Queensland. They were on a three-match unbeaten run and sitting atop the Super Rugby Australia table after beating the Western Force.

But since the bye week in Round 4, their tournament has begun to unravel. They lost (unluckily) to a last-minute penalty against the Brumbies, and over the weekend they were unable to prevent their most bitter interstate rivals scoring at will in a remarkable first half at the Sydney Cricket Ground.

The Waratahs scored five tries in the first period. When the rain poured down out of a blackening sky after halftime, it came as a merciful relief for the Queenslanders. Otherwise the Tahs might have racked up a cricket score.

What has changed in the passage between the unbeaten initial run and the post-bye collapse? The steady drip-drip of question-marks about the Reds’ defence, which I’d raised in the original iteration of 2020 Super Rugby back in March, became a raging torrent on Saturday evening.

It was as if a dam had finally burst. Where the Reds conceded eight tries in their first three Super Rugby AU games, they’ve shipped nine in two matches since. The Reds have now conceded four more tries than any other team in the competition – including the Force, who have won no games at all so far.

The coaches had picked Fraser McReight at number 7 and moved Liam Wright to blindside for the first three matches, but they dropped McReight to the bench, started Angus Scott-Young at 6 and moved Wright back to the openside flank in Round 5 and 6.

It has not worked, especially on the defensive side of the ball. Poor Angus Scott-Young managed to look better as an emergency second-rower against the Force than he did as a blindside flanker on Saturday evening. The Queensland back row was a mess from beginning to end.

The problems started with the Reds’ failure to secure their own lineout ball, despite an average advantage of two inches per man in the back five forwards, and the absence of lineout leader Rob Simmons from the opposition pack.

As against the Force, the Reds chose to deploy Wright at the front/middle of the line: 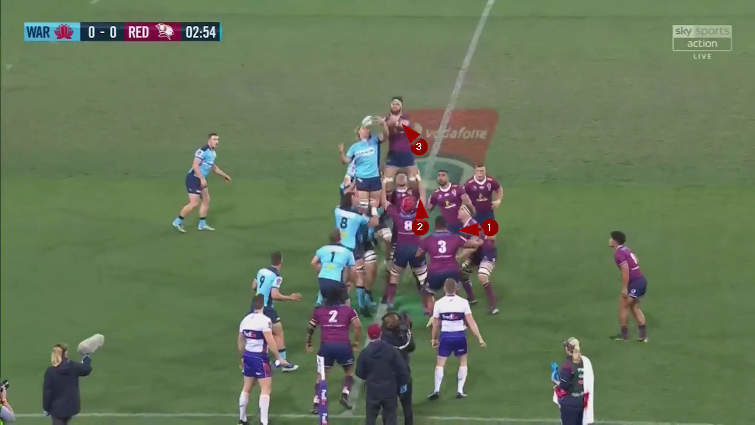 At this lineout, turned over by Ned Hanigan, Wright is the target with both Scott-Young and Harry Wilson knitted tightly around him. All three back-rowers are therefore grouped towards the front end of the line, When the ball is spun out to the far touch-line, there is no back-row cover folding in behind the line of backs:

The two Queensland forwards closest to the play when James Ramm makes his break are locks Angus Blyth and Lukhan Salakaia-Loto. The back row is nowhere to be seen.

The effect is compounded by the Reds backs operating a rush defence. The physical demands are far higher than they are in a drift or in an up-and-out system. There are two waves of defence, the backs attack that much further upfield, and there is a premium placed on forwards who can run well enough to cover the space they leave in behind. It is exhausting aerobic work.

At an average of nine kilos per man heavier than their opponents, the Reds’ forwards never looked likely to be able to manage those spaces:

This is the Waratahs’ first try of the game. The Queensland backs rush upfield, there is a bounce pass from Karmichael Hunt out to Ramm out on the left to slow things down, but even then, after Ramm makes the bust, the forward cover is paper-thin: 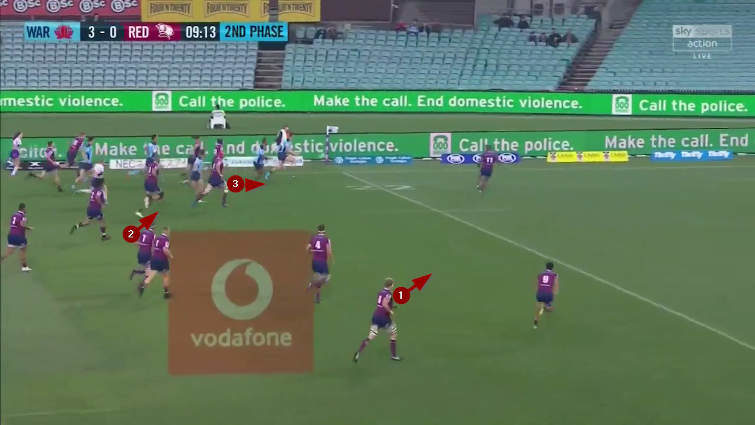 Wilson at least overtakes Salakaia-Loto, but gets nowhere near enough to stop the final offloading sequence between Ramm, Hunt and scrumhalf Jake Gordon.

For the Waratahs second try, defensive negligence bordered on the criminal (at 1:20 in the above highlights clip). The referee has already awarded a penalty advantage, and Gordon makes no secret of his desire to take a quick tap: 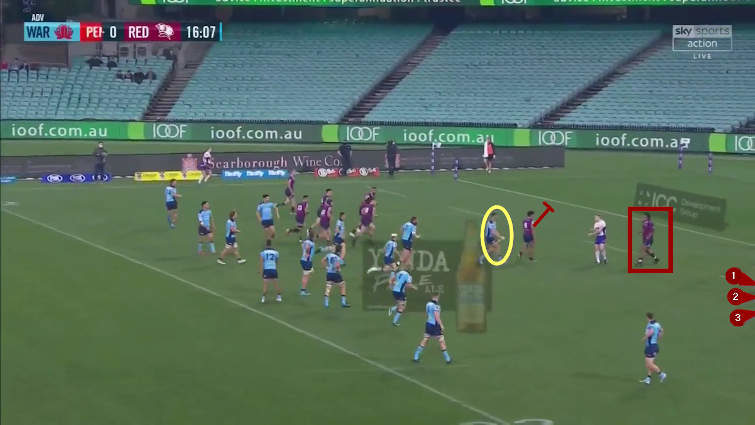 Reds halfback Scott Malolua (who should be Gordon’s mirror on this play) has his back turned, and all three back-rowers are out of shot on the right side of the field. Only hooker Brandon Paenga-Amosa is alert to the danger, and his chances of stopping Gordon one-on-one are somewhere between slim and none. ‘Slim is outta town’ at that moment.

Meanwhile, the Reds persisted in calling long lineouts with both Wright and Wilson bunched towards the front: 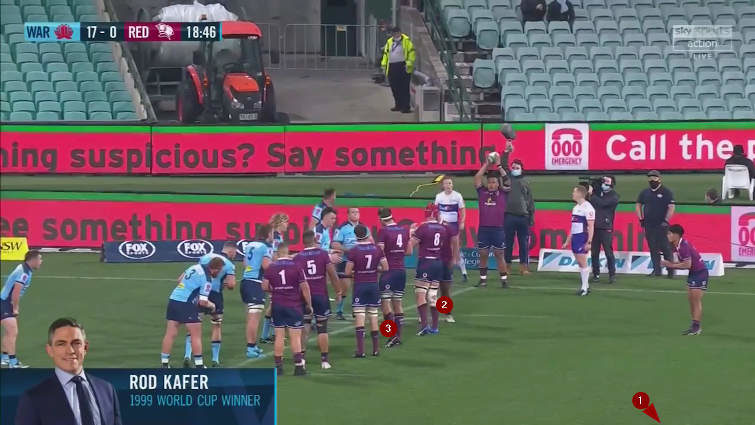 When the ball is turned over, it results in some truly bizarre back-row positioning after a couple more phases: 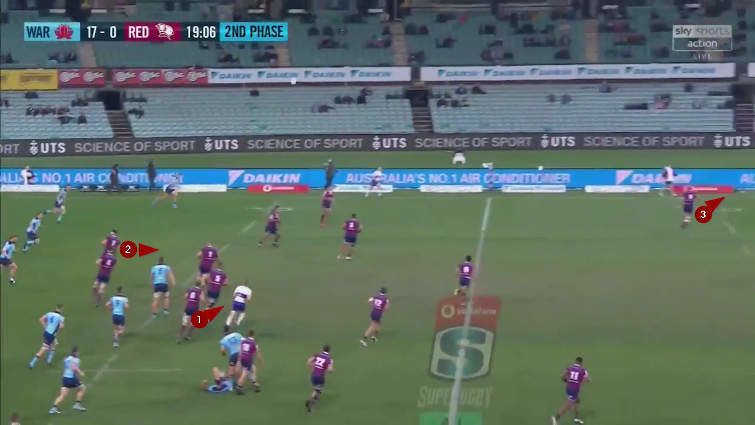 Wright and Scott-Young are in the middle of a ragged Reds defensive line, while Wilson is corner-flagging in the backfield against the long kick 30 metres behind them!

All three were caught on the wrong side of the ruck for the Waratahs’ third try of the game (at 1:44 on the highlights reel). The crucial moment is visible from the wider shot: 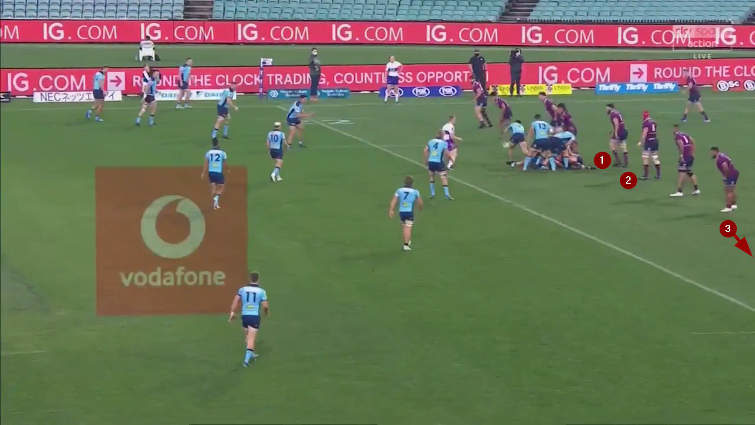 There are two sky blue outside backs (Jack Maddocks and Ramm), two back-rowers (Lachie Swinton and Jack Dempsey) and a hooker (the lively Tom Horton) opposed on the short side by only three Reds defenders: lock Angus Blyth, scrumhalf Malolua and replacement back Jack Hardy. It is an unequal contest with all of the Queensland back row so far away from the scene.

The next New South Wales score (at 2:17) was an even more direct exploitation of the disjointed Reds back row. Wright is competing in the air, which was fine with Fraser McReight standing alongside James O’Connor against the Force. But Scott-Young does not even lay a finger on Gordon after he bursts between two front-rowers around the end of the lineout.

The balance in the back five forwards, which Queensland had in the first three rounds of the competition, has been unequivocally lost.

It had the effect of playing Michael Hooper into the game in quite spectacular fashion, and dispelling any remaining doubts about his right to a starting spot in the first Wallabies side to be picked by Dave Rennie:

Hooper ruled the open spaces on both sides of the ball with almost no serious opposition. In this instance, with Scott-Young taking himself out of the play with a late shot on Maddocks, Wilson corner-flagging and Wright trudging back in midfield, Hooper has no opponent at the first ruck: 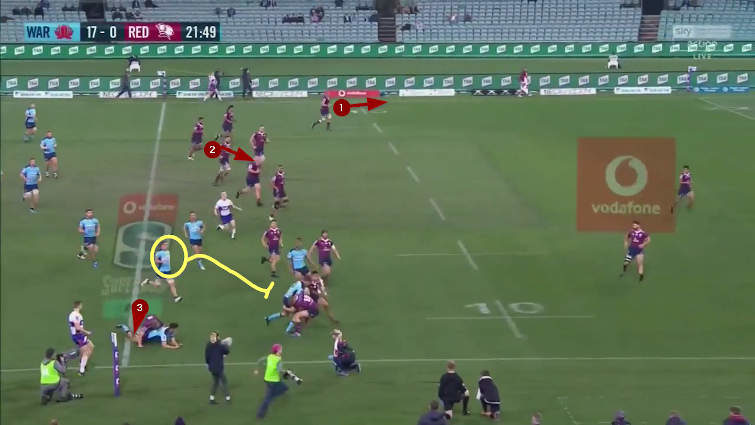 Defensively, Hooper won five turnovers and was miles ahead of the Queensland back row in all the important moments:

As Hunter Paisami breaks down the left side-line, Hooper is more than 20 metres ahead of the nearest back-row support for the Reds, Wilson: 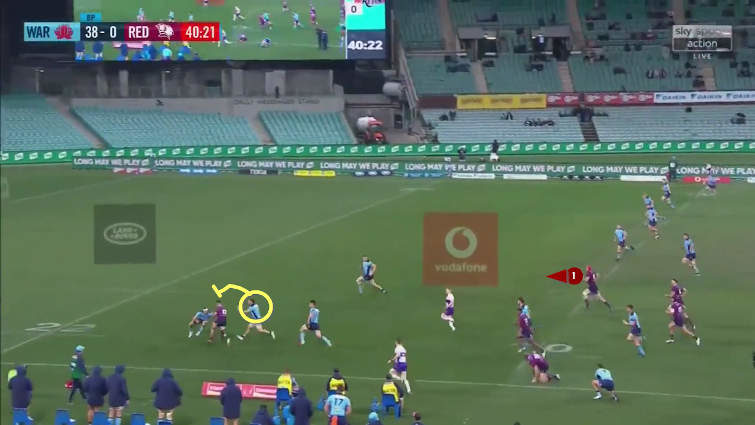 He even has time to make a second, and decisive, play on the ball before the next man (Scott-Young) arrives.

Even in more structured scenarios at the ruck, the task of removing Hooper was often left to the Queensland backs:

Wilson carries, but Bryce Hegarty makes a poor attempt at cleaning out Hooper and another ball is lost.

The most symbolic moment of all arrived after another Reds’ break down the right in the second half:

Hooper has time to organise the defence as Alex Mafi thunders down the right touchline, make a tackle, get up again and recover the loose ball, all before the first Reds forward arrives on the scene. That forward is not one of Hooper’s back-row opponents, but second-rower Angus Blyth. It was as neat a capsule of the game as any other.

Summary
Every coach in the game looks for winning formulas in selection. Once they have found it, they tend to stick to it through thick and thin. Few voluntarily change course again.

Brad Thorn found a winning formula by shifting Lukhan Salakaia-Loto to the second row, and Lukhan is now rewarding that faith with some substantial performances in his natural position. However, Thorn has rowed back on the other success story, which involved Liam Wright moving to number 6 and the introduction of the outstanding young number 7 in Australian rugby, Fraser McReight.

It is no coincidence that a significant performance drop-off occurred against the Waratahs, a side the Reds had already beaten earlier in the competition. Whenever the Reds lost the ball, their back row was conspicuously unable to cover the many holes left by their rushing backline defence.

The Reds never adapted. They never called shorter lineouts to get more defenders out into midfield, they never switched from the back-line rush to a more conservative pattern, and they failed to get McReight out on to the field until it was all far too late.

In the process, they gave Michael Hooper the run of an open field and he made hay, with or without the ball, whether the sun was shining or not. It was no coincidence that Jack Dempsey and Ned Hanigan had their best games in the sky blue for some time, either.

In the process, they have probably also squashed for good any challenge their captain Liam Wright might have presented to Hooper for the Wallabies number 7 jersey. I believe Wright’s challenge for the number 6 shirt is still very much alive, and that Harry Wilson will be in the squad as reserve number 8.

But the message is clear: it is high time that Thorn stopped cutting off his own nose to spite his face. Or for that matter, quits looking a gift horse in the mouth, to check for imaginary imperfections. Play Fraser McReight from the start, and watch him go.

Why the college football season is on the brink of cancellation

The NRL’s Integrity Unit continues to be maddeningly and bafflingly…