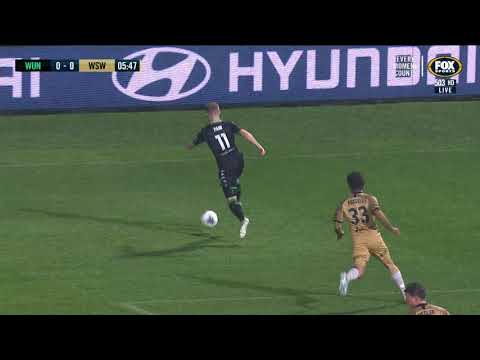 The A-League’s second eight-goal game in nine days came as Western United and Western Sydney Wanderers played out a crazy game of football which saw two chipped goals, a 3-0 lead thrown away by Mark Rudan’s side, and JP de Marigny’s side throw it away with two late goals.

For this analysis, I’m going to be taking a look at all eight goals of the game.

The first goal was a bit of a sloppy error from the Wanderers, with Tate Russell and Keanu Baccus both drawn to the ball.

Max Burgess then had time to measure a cross that Josh Risdon attacked in front of Daniel Georgievski.

The second goal is a perfect example of some of the frailties of the Western Sydney defence that they’ve had most of the season:

So it can be easy for a team to pick them off methodically one at a time – draw out the wingback (opening the flank), draw out the outside centre-back who’s covering the wingback, and attack the centre (which is now undermanned and scrambling to reorganise).

Let’s look at it in the context of the second goal:

Goal 3 – WUN 3-0 WSW: Another clever set piece from Western United
Following the two creative set-pieces Western United had against Melbourne Victory that resulted in goals, they came out with another fantastic corner.

At first glance, it might just seem that Alessandro Diamanti hit a fantastic shot that the goalkeeper Tristan Prendergast messed up, but Western United choreographed this one perfectly.

Western United attacked corners with five players in the box, who would crowd the inexperienced Predergast, a strategy that almost worked for Central Coast Mariners two weeks ago. Burgess would either join them in the box or offer a short option, with two players scattered around the edge of the box.

Western United versus Western Sydney Wanderers: WSW’s corner assignments
The goal seemed like the standard setup, with Western United crowding the goalkeeper and Burgess in the box.

The players then backed off, coming deep, with Connor Pain coming up as the short option and Alessandro Diamanti feigning confusion by putting his hands up. Simon Cox has been distracted by the Western United players dropping off, and doesn’t notice Pain shifting over. O’Doherty has him covered to begin with, but when the short corner is played it becomes a two-on-one.

Tate Russell (who would usually come short) is occupied with Max Burgess in the box, while Kwame Yeboah (marking the front of the six-yard box) sees Steven Lustica on the edge of the box and looks to cut that pass off, instead of coming out to support Jordan O’Doherty. He’s probably used to someone else coming out to support O’Doherty, so didn’t expect that he had to be the one to do it.

Diamanti and Pain play the one-two against the overloaded O’Doherty, and Diamanti is afforded a free run into the box, scoring with a neat little chip that Tristan Prendergast gets a hand to but can’t push out. Prendergast’s footwork is not great and doesn’t give him much movement across his goal, with his feet coming together on the third step and he’s not able to get much power into his jump. 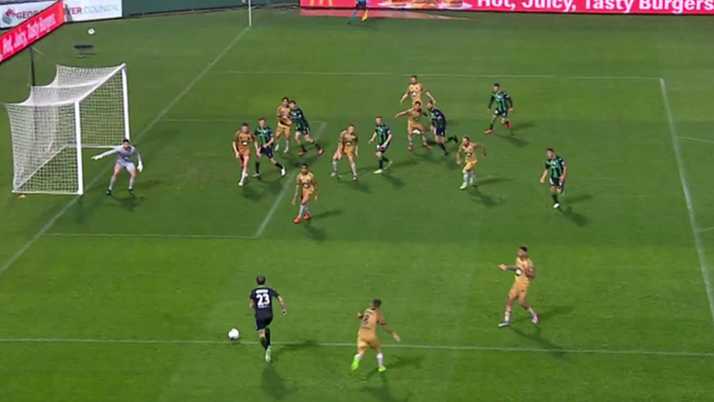 As Diamanti walks into the box untouched, the inquest already starts behind him:

O’Doherty: Why aren’t you challenging him?

Yeboah: He’s not my responsibility!

All four combined to create an overload down the right for Kamau to cross to Duke.

After returning from his argument with the referee, Pain takes up a position in front of the first attacker. Someone tells him to instead shift over to mark Kamau on the edge of the box, with Burgess instead moving forwards. 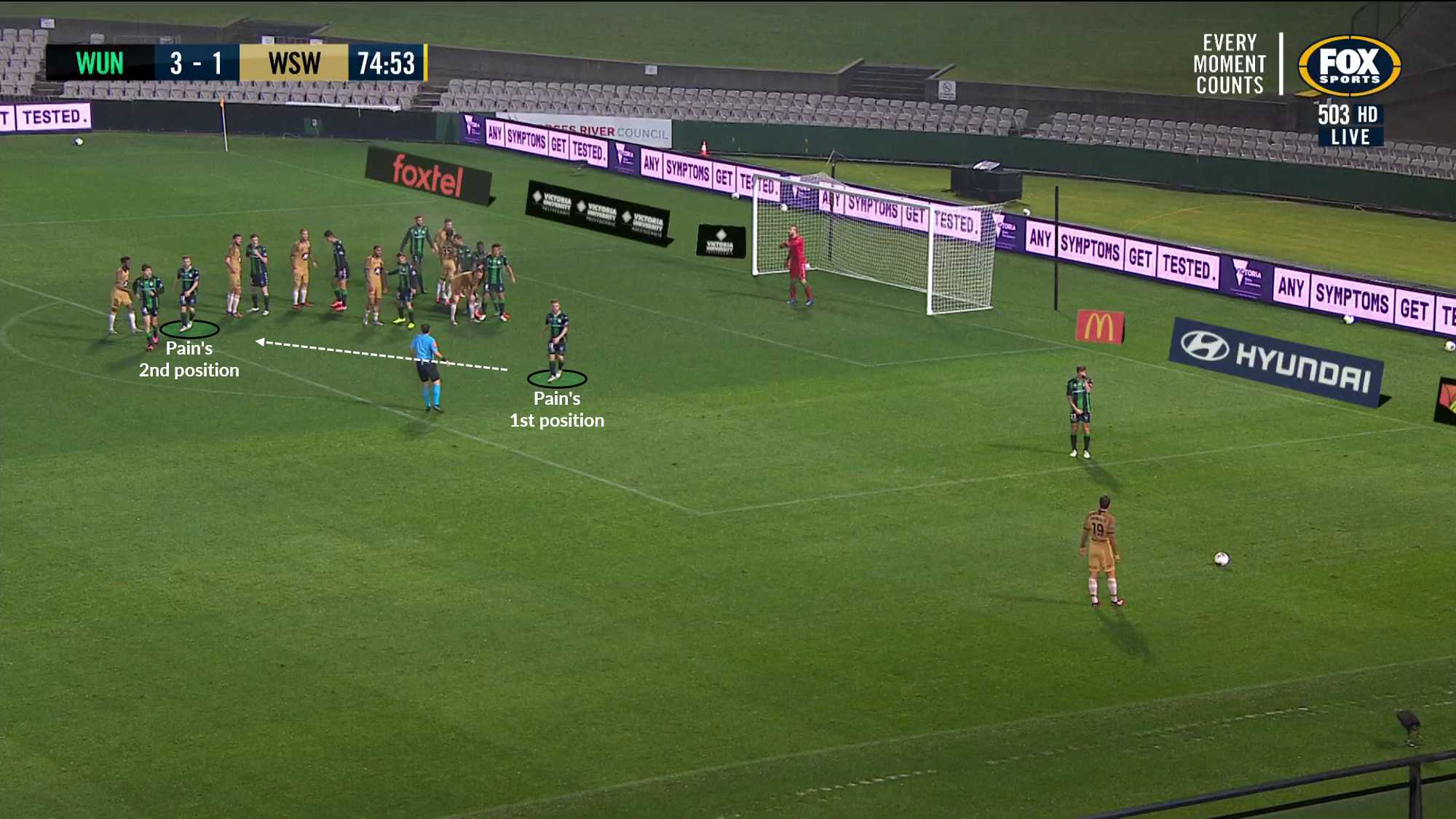 It ends up being a fantastic finish from Mourdoukoutas, but maybe if Pain had not been told to move from his first position, Schwegler might not have played the ball on the ground, and it could have been easily cut out.

This is a relatively simple one. With Western United dropping back deeper, the Wanderers are able to get more men forward without having to worry about the transition. Mitch Duke is the main goal threat for Wanderers, and his movement pulls out Aaron Calver (probably unnecessarily with Tomislav Uskok covering) from the right side, creating space in the channel for Georgievski to receive a great ball from Schwegler.

Yeboah scuffs it to Duke, who scores with a good strike.

I said Mourdoukoutas was assured in possession earlier right? Oops. An uncharacteristic fumbled touch allows Burgess to win the ball and go one-on-one with the goalkeeper.

Watch Prendergast’s movement as Burgess comes towards the box – he takes small hops, shuffling forwards, with his hands going all over the place as he moves, rather than down low by his sides.

When he opens up for his block save, his hands are actually still on their way down, and he doesn’t manage to spread them out effectively until the ball is already past him. To be fair, it may have not made too much of a difference as Burgess finds the corner.

Goal 8 – WUN 5-3 WSW: Diamanti wraps it up
It’s a great goal from Diamanti, but it could equally be chalked down to Prendergast being at fault for this one. It’s important to note that his vision of the shot is blocked by the players in front of him, and by the time he sees it, the ball is almost halfway to the goal.

He’s a bit slow with his feet again and doesn’t manage to get any power into his jump and just misses the ball as it sails over him and into the net.

Prendergast’s view of the shot is blocked by the three players in front of him, resulting in him reacting late

Summary
This will go down as a classic A-League match, a truly entertaining and absurd game of football.

Western United managed to survive their capitulation and kept their march towards finals alive, and were probably quite lucky to do so with the error from Tass Mourdoukoutas gifting them the chance to regain the lead.

They’ll certainly hope that Andrew Durante recovers quickly to help them keep the defence organised, while Diamanti and Burgess have hit excellent form for the final few games and hopefully finals.

Western Sydney Wanderers’ finals dreams, on the other hand, were shattered. Their defensive frailties were on show again, followed by a tantalising display in the second half which shows what they’re capable of. With Schwegler retiring, rumours of Duke heading to the Middle East, and a leaky defence, the Wanderers have a huge task to rebuild.

This performance will have also unfortunately blemished the A-League career of Tristan Prendergast. Being lobbed twice in one game will destroy any goalkeeper’s confidence, especially when both were fairly saveable.

Their upcoming opposition will definitely be targeting how they can take advantage of him, but I also wouldn’t be surprised to see Nick Suman play the next game.