Despite securing the Premiers’ Plate since coming back from the season pause, Sydney FC’s formline has fans and media questioning their championship credentials.

Just looking at the scoreline, you would have thought Sydney had it easy in a 3-1 win over Wellington in their first game back.

Their performance was far from polished that night, and Wellington led before Sydney were awarded a somewhat fortunate penalty. The win was only sealed late on with a double from Trent Buhagiar after the New Zealand side themselves exposed and later saw a goal ruled out for offside that VAR would have surely allowed.

In the four games since, the Sky Blues are winless and have taken just two points from a possible 12.

The rhetoric coming from the club is what you’d expect.

“I think I can turn it (our form) around very quickly,” Corica told reporters following his side’s one-all draw with Brisbane Roar.

“I think the last couple of matches we have shown we are back to our best with the ball, especially in the second half (against Brisbane).

“It is just about finishing teams off and creating a few more chances.”

There’s no doubt Corica believes what he is saying and there is weight behind his words. He already boasts two trophies in his short time as Sydney manager.

But there is cause for concern.

The logjam of fixtures in the return of this interrupted season meant clubs needed to hit the ground running.

For Sydney, with the Premiers’ Plate all but secured before the break, their remaining games stood to be great opportunities to optimise their performance and ensure they would be ready for sudden-death football.

They’ve now burned five of their six games, and have one last chance to finetune before the finals series begins.

And it’s not against a side with nothing to play for – they come up against a Western United outfit that may well be desperate for the three points to secure their own finals spot.

Centre-back Ryan McGowan’s form has been worrying, with the former Socceroo again caught out against Brisbane. He was slow to react to a through ball for Brisbane’s goal and also struggled in one-on-one situations. 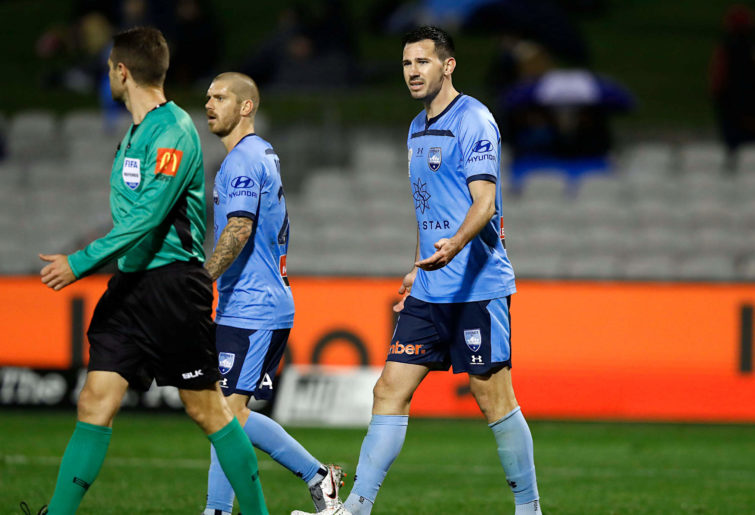 On the attacking front, they’ve only managed three goals in their last four outings. They’re certainly not going to be comfortable with that stat going into the finals and Corica will be hoping for a much more prolific showing against Western United.

This is not to say they lack attacking weapons. Quite the opposite, in fact. You can never count out Kosta Barbarouses – despite his up-and-down 2019-20, he remains a legitimate threat up front – while Adam le Fondre’s stats speak for themselves. Scoring at a 0.76 clip throughout the season, he is a threat every time he takes the pitch.

Young gun Luke Ivanovic showed off his goal-scoring ability in the draw against Brisbane with a sumptuous curled effort that even the in-form Jamie Young could only watch sail past him. Ivanovic didn’t see the second half of that match, but Corica confirmed that was due to cramp and he didn’t suffer any serious injury.

It’s not likely Ivanovic will feature from the start in the finals, but he’s certainly a handy option for Corica to bring on in the second half and let him run at tired defenders.

It’s not all doom and gloom for Corica’s side. Across their five games back, key players have been rested and they’ve encountered sides with a lot more to play for than themselves.

There have been flashes of the pre-COVID break Sydney, but they’ll need to be right back to their best in the finals.

The performance was solid and had they not run into an in-form Young, they would have notched a win last time out against Brisbane.

There’s a fair bit hanging on their final game of the regular season. A win would salvage their record since the A-League’s return but anything less would leave it looking quite grim.

More importantly, attaining the three points would provide a significant psychological boost for Corica and his squad.

They’ll need to draw on every ounce of that experience because they certainly won’t be able to rely on form.

In search of the mythical five-in-one cricketer

PCB to file appeal against reduction of Umar Akmal’s ban